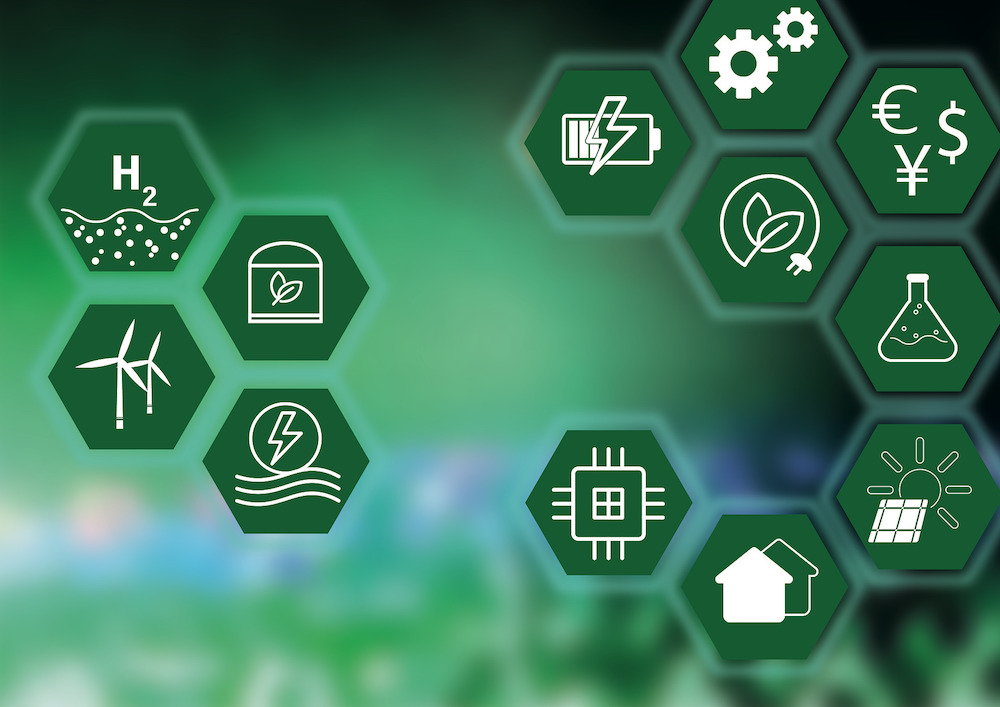 back to all insights |Published 1st Jun 2022

The global energy transition requires the development of new technologies to store and transport energy generated by renewable sources, such as solar and wind power. Green hydrogen technology uses renewable power to split water into hydrogen and oxygen by electrolysis. The hydrogen produced acts as a carbon-free energy vector – i.e. it facilitates the storage and transportation of renewable energy.

Green hydrogen can be transformed into ammonia and synthetic fuels, or it can be stored and later utilised through hydrogen fuel cells – offering a route to decarbonise heavy industry, haulage and shipping. The development of the hydrogen economy also promises to spur the development of new industries and create jobs. With vast solar and wind potential, extensive deposits of platinum, and amenable regulatory environment, Africa is well positioned to become a green hydrogen superpower.

In order to better understand the continent’s potential, Africa Practice co-convened a seminar with trade association, the African Hydrogen Partnership (AHP), and leading regional law firm Webber Wentzel. In the margins of the Mining Indaba in Cape Town, our CEO, Marcus Courage, facilitated a discussion with protagonists in the hydrogen economy from industry and government:

The speakers covered the opportunities for platinum miners in the green hydrogen revolution; initiatives to co-create the hydrogen economy; the steps required to develop the value chain and boost local employment; and the regulatory and institutional reforms necessary to expedite the energy transition.

1. Proof of concept exists thanks to Anglo American

Fahmida Smith of Anglo American explained how the company is piloting green hydrogen at its platinum group metals mine in Mogalakwena, Limpopo province, South Africa, in a bid to reach carbon-neutrality across its operations by 2040. In May, Anglo American launched the world’s largest hydrogen-powered mine haul truck at Mogalakwena. The hybrid truck was developed by Anglo American and designed to operate in everyday mining conditions. It is powered by a 800KW hydrogen fuel cell and a 1.2MW battery. These collectively generate more power than the standard diesel engine, enabling the truck to carry a 290-tonne payload. Engie were responsible for the hydrogen production and hydrogen infrastructure.

The prototype truck was developed at record speed, between 2019 and 2021, and it is the first of 40 vehicles at Mogalakwena to be converted to green hydrogen, which will be generated on site thanks to solar power. Anglo American aims to convert all 400 trucks across seven mining operations to green hydrogen by 2030 under its strategy to develop a zero-emission haulage system. Currently, diesel emissions from the haul truck fleet account for between 10-15% of Anglo American’s total Scope 1 emissions; however, replacing diesel with green hydrogen in 400 vehicles would reduce an equivalent CO2 emissions associated with 500,000 current diesel vehicles on the road, according to Fahmida Smith. Worldwide, there are some 28,000 mining trucks producing greenhouse gas emissions equivalent to the nation of Austria annually, as Africa Practice’s CEO, Marcus Courage, noted, so if other companies follow Anglo’s lead, the impact could be significant.

Dr Rebecca Maserumule, Chief Director for Hydrogen and Energy at the South African Department of Science and Innovation (DSI) views the development of a green hydrogen economy as playing an important role in helping to address the government’s triple challenges of poverty, unemployment and inequality. In February, the DSI published a Hydrogen Society Roadmap – authored with contributions from sixty stakeholder groups – which sets out a national hydrogen strategy aimed at realising domestic energy security needs, while also positioning the country to export green hydrogen and ammonia to Europe and Asia.

As Dr Rebecca Maserumule explained, the DSI estimates that up to 3 million jobs can be created from realising  plans set out in the Roadmap, which runs to 2050. Four projects, including the South African Hydrogen Valley (developed in conjunction with Anglo American, Bambili Energy and Engie), are expected to contribute at least USD 5 billion to the South African economy over that time horizon. The proposed valley will stretch approximately 835 kilometres from the platinum group metals-rich Bushveld geological area in Limpopo province, along the industrial and commercial corridor to Johannesburg, Gauteng province, and to the south coast at Durban, KwaZulu-Natal province. Nine key pilot projects have also been identified for development across the transport, industrial, and construction sectors. The DSI is now focused on implementing these plans, by creating an enabling environment for first-movers in the green hydrogen economy and developing new partnerships between government and the private sector.

3. Green hydrogen can be cost competitive

Demand for green hydrogen is set to grow, thanks to climate-oriented policies – including Nationally Determined Contributions (NDCs) under the Paris Agreement – driving down production costs over time. For now, however, green hydrogen is still expensive relative to fossil fuel alternatives. Jason Cuomo, Lead Process Engineer, Hydrox Holdings, provided insights into the technology behind the process and recent breakthroughs which promise to increase the efficiency of green hydrogen production, thereby making it more cost competitive. Technological innovations promise to strengthen the ability of electrolysers to run on a renewable electricity load – which is inherently intermittent and irregular. Jason also identified projects which can be scaled up to gigawatt capacity, including Namibia which plans to put together several electrolysers in modular banks to output over 2 GW of hydrogen generation capacity. Finally, Jason noted that hydrogen fuel cells have efficiency gains over diesel power, since more energy can be retrieved from the source.

Jason van der Poel, Head of the Energy Sector Group, Webber Wentzel, noted that green hydrogen and ammonia projects are made up of many component parts – each with their own legal challenges in different jurisdictions. For instance, the renewable energy portion is made more complex in South Africa in the absence of a standardised power purchaser agreement for private buyers. Negotiations can be convoluted, raising risk navigation issues. South Africa is building up to a competitive multi-market for power; however, regulations are not yet law and the market is not yet fully open. The licensing and registration environment for these projects is still maturing. Projects also need to overcome permitting and other legal issues around water supply, desalination, green hydrogen production, bulk liquid storage, health and safety, construction, land law, and export and shipping regulations inter alia. In each of these stages, Jason identified the strong foundations established in South African law, but also highlighted the many permissions required to pull off a green hydrogen project in South Africa. Additionally the requirement for more regulatory certainty, which the Hydrogen Society Roadmap identifies, and which would need to be systematically addressed if projects are to come to fruition.

5. …However, South Africa has a means to cut through the red tape…

President Cyril Ramaphosa has recognised the importance of government support for green hydrogen development opportunities. South Africa has designated Boegoebaai, in the Northern Cape province, as a Strategic Integrated Project (SIP) in the National Development Plan, paving the way for petrochemicals giant, Sasol, to determine the feasibility of a proposed 400,000 tonnes green hydrogen project, which would service international markets. The designation of Boegoebaai as a SIP facilitates the speedy granting of permits, ensuring that complex issues, including environmental permits and the subdivision of agricultural land, are resolved within 60 days. Sasol commenced its feasibility study in June 2021, which it expects to complete by June 2023. Sasol has also finalised a memorandum of agreement with both national and local government to develop the Boegoebaai site.

6. …And several other African nations have an opportunity to leverage their abundant natural resources to develop green hydrogen

Fahmida Smith highlighted that several other African nations are preparing to participate in the hydrogen economy.

Namibia, South Africa, Morocco and Egypt are each at advanced stages of preparedness, with master plans developed, investment incentives introduced and commitments from private project partners secured. Kenya, the Horn of Africa and Mauritania are following close behind. More African nations are expected to announce plans for developing green hydrogen ahead of the 27th Conference of Parties in Sharm-El-Sheikh, Egypt, in November.

The opportunity for these nations, and others, to harness their abundant natural resources and to become primary players in the production of green hydrogen and green ammonia exists today, supplying a means to address national energy insecurity, produce fertiliser feedstock to tackle food insecurity, and create sizable economic opportunities in the hydrogen value chain.

Mali, with shallow natural hydrogen reservoirs (not requiring electrolysis), and Somaliland, with its abundant sunshine and consistent wind flows, both have competitive advantages in the hydrogen economy. If the port of Berbera can be transformed to a maritime refuelling hub for vessels, then there is no reason why Somaliland cannot become a hydrogen superpower, Siggi Huegemann, co-initiator of the AHP believes.  Somaliand could produce green hydrogen at a cost of USD 1 per kg, he estimates.

“The world cannot decarbonise without African green hydrogen,” Huegemann has stated. This vital zero-emissions energy vector can be transformative for several African nations.

Marcus Courage is Africa Practice’s CEO and chaired the event in Cape Town on 10 May.