For the love of fuel subsidies

In the quest for a cleaner and greener world, stakeholders have turned a critical eye on systems that encourage the consumption and production of fossil fuels. The rationale is that as more renewable projects are being launched, systems such as crude oil subsidy payment schemes ought to be scaled back.

Globally, governments spend USD 5.2 trillion per year (approximately 6% of global GDP) to subsidise petroleum, natural gas, and coal. Sub-Saharan Africa accounts for only 2% of this, equivalent to USD 104 billion per year. If subsidies were eliminated, the region could see a 20% reduction in CO2 emissions.

Governments across the continent – already facing multiple fiscal constraints – spend 15% of their revenues on fuel subsidy payments, more than their expenditure dedicated to poverty alleviation, for example. Advocates of fuel subsidies often argue that the latter can actually constitute poverty alleviation initiatives in themselves, since they aim to reduce the burden on consumers, who are sometimes poor. However, subsidies have largely failed to achieve this objective – the proportion of subsidy payments that benefit the poor on the continent is estimated to be only 20%. 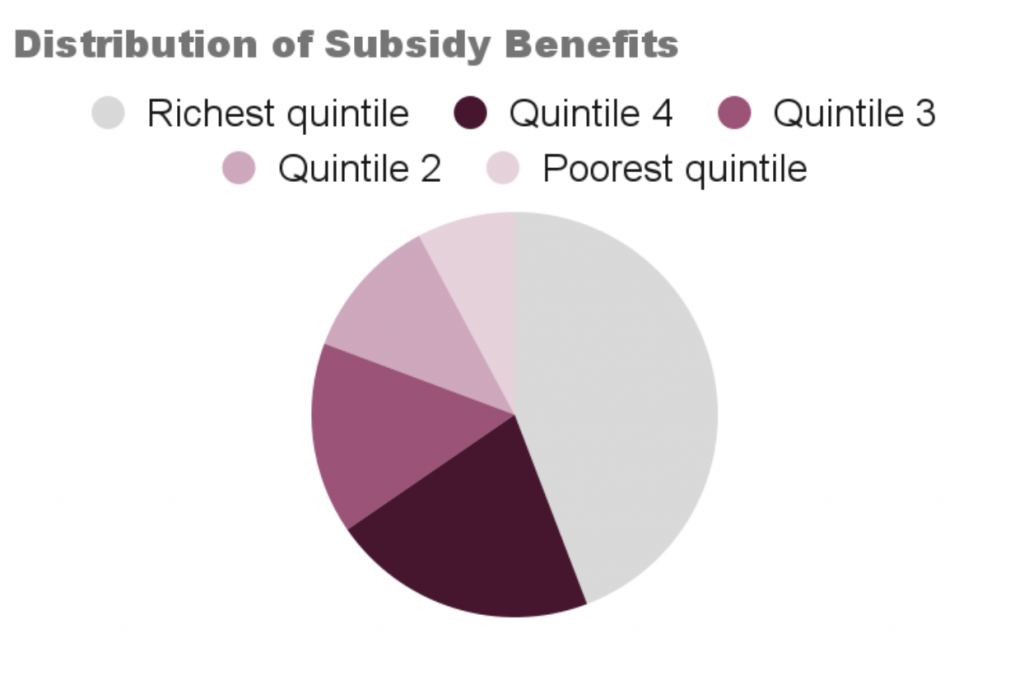 The road to reform

The socioeconomic and extremely political nature of subsidy systems make the road to reform an uphill one. In Africa, at least 30 countries have a fuel subsidy system in place, and almost all of these have announced plans to scale back in the medium to long term, but with little progress so far.

Nigeria, the region’s largest oil producer, has one of the most controversial systems of fuel subsidies. With USD 294 million in monthly payments, the fiscal implications on the oil-reliant and heavily indebted government are immense. The disjointed and opaque processes behind subsidy allocation also act as a deterrent to investors.

Fuel subsidy removal has been a topic of conversation in Nigeria since the 1980s, and although fuel prices have increased astronomically since then, this is due to exchange rate depreciation, rather than a reduction in subsidy payments. Progress is hampered by two intertwining factors: a lack of political will and negative public sentiment (in some circles, removal of fuel subsidies is considered to be political suicide).

Although the passage of the Petroleum Industry Act in August 2021 pitched subsidy reform as a priority for the government, discontent in some corners – as witnessed during the Occupy Nigeria movement in 2012 – is expected to continue to impede full implementation.

Where governments are distrusted, communication and consultation are key. Governments could spearhead campaigns targeted at educating the populace about the externalities of subsidies, the implications of a reform, and the benefits of additional  government revenue. Namibia, one of the success stories of subsidy removal on the continent, for example, adopted a consultative approach to reform.

Experts advise against an outright removal of subsidies, due to the impact on household purchasing power, and the ripple effects on consumer prices and purchasing power. Instead, governments can adopt a phased approach, gradually reducing subsidies and  increasing prices over the short to medium term.

Additionally, since the main argument for subsidies is easing the burden for the poor, governments need to be more strategic in the approach to poverty alleviation. These need to go beyond cash handouts as planned by the Nigerian government. For example, as part of its subsidy reform efforts, Ghana eliminated public school fees, and increased health care provision in rural areas.

Oludamilare Adesola is a Consultant at Africa Practice, specialising in economic analysis and sustainability strategy. She can be contacted on [email protected]