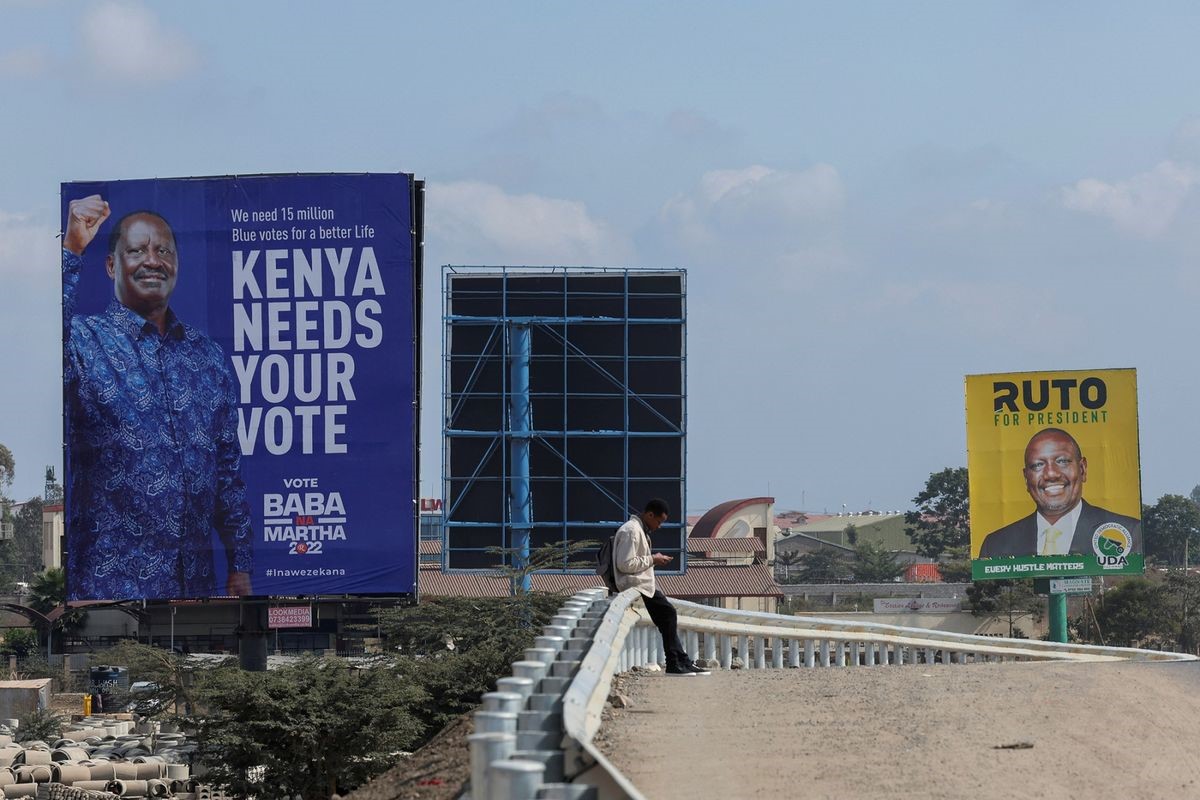 Six days after most polling stations closed in Kenya, the head of the Independent Electoral and Boundaries Commission (IEBC) declared current Deputy President William Ruto as the winner of the presidential election. His narrow, first-round win – with 50.49% of the total valid votes – saw his main opponent, Raila Odinga, come second with 48.85%. Observers’ worst fears of ensuing post-electoral violence did not materialise, even if prior to the announcement, there were scenes of chaos at the official venue. In a subsequent plot twist, four IEBC commissioners, disowned the results, alleging “opacity” in the verification process.

Perhaps paradoxical to some, Ruto’s campaign portrayed him as an outsider to Kenya’s political dynasties, despite the fact he (still) serves as the deputy to outgoing President Uhuru Kenyatta. A more historical outsider, Odinga, meanwhile, managed to secure the incumbent’s backing.

What is not so paradoxical is Odinga’s suggested intention to legally dispute the results of the presidential election, repeating a  pattern established over the past two electoral cycles. He, his supporters, and formal and informal allies have until Monday to file the respective petition with the Supreme Court. If no petitions are submitted, Ruto would be sworn in on 30 August. If a petition is submitted, the Supreme Court would rule within a 14-day period following the receipt of the petition, per the constitutionally mandated timeline.

Speaking of paradoxes, the four dissenting commissioners presented a mathematically incongruous case for nullifying the elections – attracting ridicule online and offline. The vice chair of the IEBC spoke of discrepancies amounting to 142,000 votes when the actual figure was 100 times smaller. This has dented public perceptions of the viability of any potential forthcoming legal challenge.

Most (non-presidential) aspirants have publicly accepted the results and appear focused on a peaceful transition. A number of defeated gubernatorial aspirants, however, have indicated that they will contest the results.

As Kenya eagerly awaits the outcome of potential challenges to the presidential election results, a broader picture of a materially shifting political landscape is beginning to crystallise.

Results in the Mount Kenya region indicate Kenyatta’s waning popularity – as an Odinga backer – in the vote-rich area, despite the fact that it constitutes the heartland of his Kikuyu community. Ruto’s extensive campaign across the region, coupled with a series of notable defections and his running mate Rigathi Gachagua’s ability to mobilise the grassroots, seems to have paid off. Some are seeing this as the end of ethnically determined voting patterns, but that might be an overstatement. What is clear is that Ruto’s “bottom-up”, class-based mobilisation approach worked.

A Ruto lead in the legislature too

The Ruto-led Kenya Kwanza coalition secured 147 seats in parliament, one more than the Odinga-led Azimio la Umoja. A total of 18 seats – a historic first – were won by independent MPs, while the MP winners for 38 constituencies are yet to be announced. Given the slim majority the Kenya Kwanza coalition has in the National Assembly (the lower chamber), the independent candidates, as well as the as yet to be announced 38 MPs, will become critical voices. So far, they appear to be swayed by the winning coalition, with 10 independent MPs announcing today that they would join Kenya Kwanza. Both coalitions were an adaptation to this election’s particular circumstances, as opposed to a unification based on ideology.

Party loyalty will thus be more important as the house takes shape. Should this be the case, the Ruto-led United Democratic Alliance (UDA) would have a majority, having won 101 seats, in comparison to the Odinga-led Orange Democratic Movement (ODM), which has secured 84 seats as it stands. Individual parties might be more receptive to the agenda of the ruling party within parliament, especially if there is a relatively weak minority leader.

In the Senate (upper chamber), Kenya Kwanza won a narrow majority with 33 seats, compared to Azimio ‘s 32. The remaining two seats were secured by non-affiliated candidates.

New faces are cropping up in local politics

A smaller number of governors retained their seats, compared to the new entrants who successfully made the jump from lower elective positions, such as MP and County Woman Representative. Women and independent candidates made significant strides, while Ruto’s UDA has the highest number of governors of any party – 20. The results reflect the electorate’s re-engagement at the local level. A number of veteran MP candidates lost their seats to a new crop of leaders as the electorate used their MP votes to express discontent with the incumbent administration.

Still, the youth electorate seems disenfranchised. Turnout was comparatively low. A total of 65% of the 22.12 million registered voters exercised their right, marking the lowest turnout in 15 years. This could be seen as echoing a creeping sense of nihilism, in the face even of the compelling “hustler” narrative.