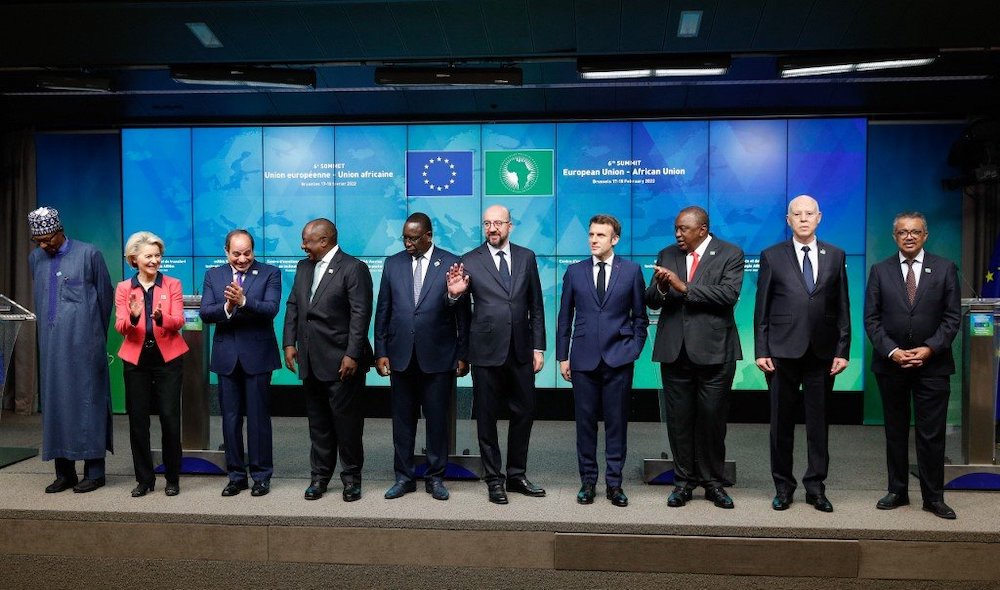 Five years after the fifth AU-EU summit in Abidjan, the sixth one was held in Brussels on 17-18 February 2022. Bringing together the heads of state or government of EU and AU member states, the summit was co-chaired by the president of the European Council, Charles Michel, and the president of Senegal and current chair of the AU, Macky Sall. French President Emmanuel Macron framed the event by clearly stating that “the agenda and promises” of the previous summit had not been kept.

The sixth summit took place in an innovative format, with EU and AU leaders participating in a series of thematic roundtables, which allowed for exchanges on challenges, but also for seeking possible solutions through joint action. The summit concluded with the adoption of a political declaration, welcoming a “renewed and united partnership” between the two continents:  “Joint Vision for 2030”.

Key announcements were made on investment, debt, healthcare and security issues. European states made generous pledges to their AU counterparts, despite some setbacks regarding intellectual property rights for vaccines. The African states’ request to set up a summit follow-up committee was accepted at the last moment by the EU, and will ensure that a mechanism will be in place to monitor the implementation of the promises made to avoid a repeat of the failures of the previous summit.

Critically, leaders announced a EUR 150 billion Africa-Europe investment package that will support the AU’s shared ambition for 2030 and Agenda 2063. The investment package is designed to help build more diversified, inclusive, sustainable and resilient economies by stimulating public and private investment in a number of areas, including transport, energy, education, digital transformation and healthcare. Particular emphasis will be placed on the green transition and supporting the implementation of African countries’ national plans under the Paris Agreement. This is not new funding, as it is the estimated size of the regional programme for Africa under the EU’s new EUR 300 billion Global Gateway infrastructure investment initiative. The Global Gateway initiative is the EU’s response to China’s Belt and Road initiative.

EU and AU leaders also supported the Common Framework for debt treatment beyond the Debt Service Suspension Initiative (DSSI). They called for voluntary contributions (the reallocation of IMF Special Drawing Rights, SDR) to achieve the overall ambition of at least USD 100 billion in cash support to the countries that need it most, much of which should go to the African continent. Countries such as Sudan, Mozambique and the DRC – with high debt-to-GDP ratios – are likely to benefit from the common framework and receive reallocated SDRs.

A dedicated instrument supporting the health sector – covering initiatives related to pandemic preparedness, health security and equitable access to essential health services – was a well anticipated inclusion in the investment package in the wake of the COVID-19 pandemic.

The EU also pledged to scale up its delivery of vaccines and to commit EUR 425 million to support the distribution of doses and the training of medical teams. Only 11.3% of the population of the continent is fully vaccinated against COVID-19. To that effect, on the sidelines of the summit, the WHO announced that six countries – Egypt, Kenya, Nigeria, Senegal, South Africa and Tunisia – have been identified as the first recipients of technology transfer for the production of mRNA vaccines.

However, intellectual property (IP) rights on the vaccines were not waived, as requested by South African President Ramaphosa, which is considered one of the only points of contention of the summit. Vaccine production is unlikely to go ahead without a temporary waiver of intellectual property rights. Sall said EU and AU leaders hoped to find a compromise by spring.

At the summit leaders agreed to continue and strengthen their cooperation to ensure peace and security on the African continent, including cyber security. They also pledged to combat irregular migration, strengthen the fight against human trafficking and strengthen border management. Addressing the root causes of migration and the challenges posed by brain drain were identified as necessary areas of work.

At a prior mini-summit on 16 February, France announced that it would withdraw its troops in Mali, as tensions between the two countries have increased in recent months. All or part of the Barkhane force will remain engaged in the Sahel region, alongside the G5 Sahel, and will be redeployed in part to Niger. However, Nigerien civil society has already expressed dissatisfaction with the prospect of an increased foreign presence, which could lead to further destabilisation of the government in a region rocked by recent coups.

The withdrawal is likely to create a security vacuum in Mali and weaken the UN-led MINUSMA, as the French strategy focuses on consolidating security support with more supportive neighbours. Increased regional efforts will be needed to strengthen security in a volatile region. Chad has announced that it will increase its MINUSMA contingent.