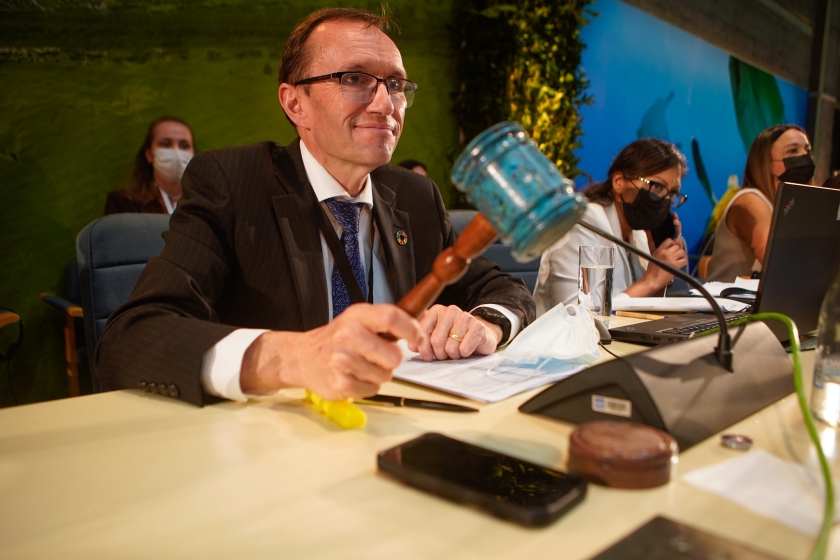 On 2 March, global leaders took a major step towards ending plastics pollution, adopting a landmark resolution by unanimous consent. The resolution, to conclude an international legally binding agreement to end plastic pollution by 2024, is the key outcome of the Fifth United Nations Environment Assembly (UNEA 5.2), which took place in Nairobi. With 175 countries signing on to a carefully drafted resolution that balanced three competing national proposals, the road is paved for an international accord that addresses the full lifecycle of plastic, including its production, design and disposal. This ambitious approach is a victory for African leaders who had rallied behind the pioneering Rwandan resolution, the most aggressive of the three proposals.

For many years African nations have been leading in the fight against plastics pollution. Almost all countries on the continent have legislation in place that regulates the production, use and disposal of certain plastics. While many are limited to thin plastic bags which have been identified as a particular waste problem, littering the environment and causing flooding by clogging sewage systems, South Africa, Mauritius and Rwanda, amongst others, also have ambitious recycling obligations in place. These recycling systems, often referred to as “extended producer responsibility” (EPR) essentially put the burden on large brands to recycle a minimum percentage of plastics within a country’s territory.

However, for long advocates have pointed out that the global plastics pollution problem cannot be addressed with recycling only, as was recognised in the Rwandan resolution draft. Plastics production is expected to double by 2050 in which case it would take up more than 10% of the remaining carbon budget in a 1.5 degrees celsius scenario. Research further shows that since 1995 alone, fine particulate air pollution caused by plastics has increased by 70% since 1995, causing approximately 2.2 million disability-adjusted life years. In recent years evidence has also been mounting that microparticles have started to enter our food chain.

It thus wasn’t a surprise when large FMCG brands came out in support of the ambitious treaty calling upon governments to  “align on regulatory measures that cover the whole life cycle of plastics, not limiting the scope of negotiations to address waste management challenges only”.

“A circular economy for plastics will contribute to the efforts to tackle climate change and biodiversity loss. The aim must be to keep plastics in the economy and out of the environment, reduce virgin plastic production and use, and decouple plastic production from the consumption of fossil resources”, the likes of PepsiCo, Coca-Cola and Unilever stressed in their statement of support.

As such, they positioned themselves in opposition to counter proposals tabled by Japan and India, who had proposed a narrow focus on marine waste management and a voluntary effort to tackle single-use plastic product pollution, respectively.

The assembly, which saw in-person engagements resume after ministers were restricted to virtual engagements in 2021, saw lengthy debates and negotiations. Ultimately, the final text reflects all three proposals. But supporters of the Rwandan resolution point to the legally binding commitments and inclusion of the full lifecycle of plastics as key victories.

In many respects the final resolution reflects the dynamics and structures that allowed the world to unite behind the Montreal Protocol. Adopted in 1987 to protect the ozone layer, the Montreal Protocol phased out the production of numerous substances that are responsible for ozone depletion. Most importantly, it provided for technical and financial assistance to developing countries to enable them to comply with their commitments – a compromise that allowed for the consensus adoption at the time. Modelled after this protocol, the now adopted plastics resolution also calls for “commitments to reflect national circumstances and capabilities” and for nations to enjoy “access to the requisite technology, capacity building and scientific and technical cooperation”.

Going forward, an intergovernmental negotiating committee will negotiate the actual agreement guided by this resolution. It will commence its work during the second half of this year, with the ambition of completing its work by the end of 2024. As part of this process, the negotiating committee is calling for the widest possible participation in both its preparatory working group and the final negotiations

Despite the early victory, African states will now need to find a careful balance in the negotiations between approaches that will see action in the global North to reduce plastics production and usage, restrict exportation of plastics waste, and further improve reuse of plastics, while shielding domestic industries and improving local management systems. Especially, the link between fossil fuel powered production methods, which are largely located in countries such as South Africa, Kenya and India, will become a point of contention as African industry will find it more difficult to transition towards clean production of virgin and recycled material.

With this in mind, a staggered approach coupled with a multilateral fund – as utilised  by the Montreal Protocol – might provide a compromise as technology transfer and capacity building take place.

Rafael Friedman is an Associate Consultant at Africa Practice.